Parents Ginger and Larry Katz speak on their child’s substance abuse and overdose death. They share their thoughts and feelings about their son Ian’s life and his struggle with drugs. They tell not only of their feelings, but of the symptoms of heroin abuse that they saw. 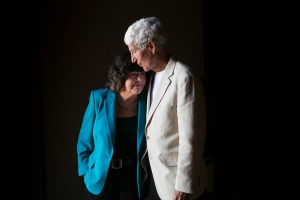 Photo by: Katherine Taylor for The New York Times

“I don’t say I wish I’d done this or that differently. What I say is that I did the best that I could with the knowledge that I had at the time. I tell people when they ask that I didn’t cause it, couldn’t control it and couldn’t cure it.”

“I wasn’t completely unaware. I had him drug tested in high school. How many moms would do that? But Ian was very good at fooling us. And I wanted to believe. That’s how denial works.”

“At college Ian began to use first cocaine, then heroin. Three friends tried heroin. One got sick. One got scared. And Ian liked it. Remember, they’re not using a needle, these college kids. They’re snorting it, not shooting it which makes them think it’s not such a major thing.”

“Ian hid his pain. I tell all the kids, “Get it out! Don’t bury it! There are people out there able to help. If you can talk to your parents, do so. If not, find three adults you can trust who will help you sort things out”.

“You are powerless at a certain point … and he’s saying, ‘I have to do this myself. You have to let me do it. Don’t search my room. Don’t do anything. Just let me handle it.’ You pray that he will realize he’s in trouble and come for help. They’ve got to do that. You can lock a kid up and in thirty days, he’ll be back on the street again doing drugs. That’s why prevention is so important. We have to reach kids before they get hooked.”

“Ian looked so well that he fooled everyone. That last summer, the doctor had put him on Clonadine and after we picked up the prescription, we went to a deli for lunch and the owner kept telling me what a beautiful son I had. And it’s true. He was a gorgeous kid. I’m watching him take this medication to keep him off heroin and I’m thinking this can’t be happening.”

“Drug dealers on campus target the popular kids. “Mom, it’s a smorgasbord of drugs at school,” Ian told me. “If you don’t have the money, they give it to you for free until you’re hooked.”

“We’ve received thousands of responses from kids and from parents and since I have tremendous support in the community, I’ve been able to connect them with the right people. Kids do open their hearts to me and I will say, ‘Here’s the number of someone who can help. Will you call this person?’ and so often, they do.”

“I always think that maybe something I say will be what some kid remembers when he is at that crossroad. So instead of making the wrong decision, he’ll walk away safe because my talking about Ian was real to him.”

“When Ginger finishes her presentation, I try to fill in whatever she might have left out. As a former social worker and facilitator for our parenting program called Courage to Speak – Courageous Parenting 101® we have researched many important facts about substance abuse with the help of prevention experts. Each presentation is different because this is such an emotional experience. Mostly, I talk about my relationship with Ian and I tell the kids how much parents really love their children.”

“Parents need to know what’s really happening. What younger kids are doing today, the older ones don’t even know. Prescription pills, inhalants. The stuff in a typical kitchen cabinet can kill your child. He puts a bag over his head, breathes the stuff in and it causes brain damage and death.”

“It’s very difficult reliving this over and over again, but after every presentation, we get feedback that the students are listening to us so that makes it even more important to continue.”