About Us – Substance Abuse Education Programs for Youth

The Courage to Speak® Foundation is a 501(c)(3) providing substance abuse education programs for youth, and its mission is dedicated to ” Saving lives by educating and empowering youth to be drug free and encouraging parents to talk to their children about the danger of drugs.” 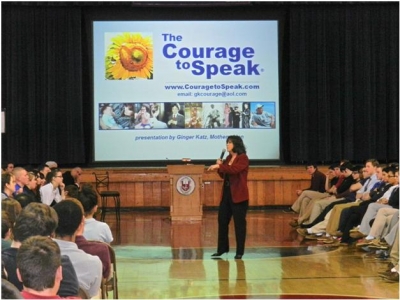 Ginger Katz along with her husband Larry presents to children, parents, educators, clergy, professionals and others at many forums including state and national conferences. With a team of experts the organization developed substance abuse education curriculum evaluated and recommended by Yale School of Medicine.  Many facilitators and teachers across the country implement the Courage to Speak Foundation student curriculum in elementary, middle and high schools as well as a multi-session program for parents called Courage to Speak -Courageous Parenting 101® which give parent tools to keep their children safe.

The Courage to Speak Foundation’s office is located at 71 East Ave, Suite M, Norwalk CT with 4 staff and a host of volunteers and college interns   Phone 203-831-9700.

About the Courage to Speak Foundation

Courage to Speak® Foundation – Who We Are
Click here to view

Our NEW Program and Services Brochure
Click here to view

Overview of Work and Awards
Click here to view

The dark-green convertible couch where twenty-year-old Ian Eaccarino died of a heroin and valium overdose twenty-one years ago is a silent presence in the basement studio that was his bedroom. His sister Candace, who has Down Syndrome, sleeps on it every Tuesday night when she visits from the group home where she lives in Fairfield, CT. Every week, she puts its cushions on the floor, covers them with a blanket and makes a bed for her brother. “Ian comes down from the clouds,” she insists, “and sleeps there.”

At the other end of the room, Ian’s mother Ginger Katz has established headquarters for The Courage to Speak® Foundation, Inc., a project that took shape in the dark months following her son’s death. “When I see Candace cry, I get angry with Ian for causing her so much pain,” she says softly, “but I know it was the drugs. Drugs make you crazy. Drugs stole Ian from us.”

Ginger Katz is determined to break what she calls “the conspiracy of silence” around the disease of teen drug abuse and addiction. Speaking as a parent who has experienced the ultimate loss, she has been telling Ian’s story all over the country, sharing insights with parents about the signs of drug abuse and  educating young people ranging from elementary school through college. The Courage to Speak Foundation received a grant from the federal government to build capacity and to evaluate its elementary, middle and high school Curriculum and the Courage to Speak – Courageous Parenting 101®with positive outcomes.

The Courage To Speak® Foundation Inc., is a nonprofit organization based in Norwalk, CT, whose mission is “to save lives by empowering youth to be drug free and encouraging parents to communicate effectively with their children about the dangers of drugs.” Ginger and Larry Katz founded the organization in 1996, just months after her 20 year old son Ian James Eaccarino died of an accidental drug overdose. Ginger pledged that she would do all she could to help prevent such a tragedy from befalling another family. Since then, Ms. Katz has become a nationally renowned speaker and has given over 1000 drug prevention presentations to students, parents, educators, law enforcement and state/national conferences. Reaching hundreds of thousands of people nationwide, she shares the story of her son Ian’s losing battle with drugs, helping parents and educators keep our children safe.

Sunny’s Story, written by Ginger Katz, is one of the substance abuse books that is written for all ages.  The book tells the story of Ian’s life from the ears, eyes and mind of Sunny, the family beagle. It’s about the ups and downs of life with his young master, beginning their meeting at the animal shelter, and ending with a futile effort to ward off disaster. The book is read in dinner tables and classrooms across the country by children of all ages, parents, grandparents, teachers, and others.

The Courage To Speak® Foundation has worked with experts in the prevention field to develop The Courage to Speak® Substance Abuse Curriculum for Elementary, Middle, and High Schools. The Curriculum – including teacher training and classroom activities – provides crucial, ongoing follow-up to The Courage to Speak® Foundation’s live presentation and video. The Foundation also provides a program for parents called The Courage to Speak Foundation- Courageous Parenting 101® . A four session program, each one and a half hours long, are taught by professionals to disseminate information about topics such as: Drug Trends in America, How to find out if your child is using drugs, What to do if you child is using drugs, How to access help, Helping kids handle stress, Taking a better look at Music, Television, Social Media and more.

Based on her own experience and research, Ms. Katz realized that merely providing information about drug use and its consequences could not surmount the obstacles of peer pressure, cynicism, ignorance, and apathy that our young people face every day. To truly change their attitude and behavior, The Courage To Speak® Foundation would have to reach them in a more direct and personal way, encourage their families to support them in rejecting drug use, and engage the community in this battle by increasing its awareness.

Therefore, the organization’s strategy begins with a dynamic, riveting, and thought-provoking presentation by Ms. Katz combining the intensely personal story of a family shattered by drugs with the latest information and statistics on substance abuse and prevention. Told with quiet intensity and rigorous emotional integrity in schools, places of worship, conferences and other community venues, her story calls forth in her young listeners a willingness to trust her and the advice, and information, that she and Mr. Katz offer. Presentations are offered to parents, preparing them to foster the life-saving change in attitude. The presentations have curriculum available as a follow up.

Our additional programs show parents and communities how to support their children to be drug-free.

How Our Substance Abuse Education Programs for Youth Organization Began

Ian Eaccarino “The heart of the Courage to Speak Foundation

Ian James Eaccarino was the much-loved son of Ginger Katz and Louis Eaccarino, step-son of Larry Katz, brother of Candace Eaccarino and dear friend to the many people he made part of his short, but vibrant life. As a kid, he liked to cuddle up on the couch with his mom, sister and step-dad. At age eight, he was captain of the soccer team. Two years later, he earned a black belt in karate and at eleven, came in second to a fourteen-year-old in a competition at Madison Square Garden. As a 5th grader, he was voted most popular boy of his class.

In high school, Ian played baseball, basketball and lacrosse. The semester before he died, he was an honor student at the University of Hartford. In September of 1996, Ian died of a heroin overdose at the age of 20 years old.

Shortly after his death, Ginger Katz founded The Courage to Speak Foundation, Inc. Speaking as a parent who has experienced a loss every parent fears, Ginger inspires people to step forward, assess their situation, and address their problems. Rather than speaking from a place of sadness, however, Ginger speaks words of hope and promise that the courage to speak – about fears, drug dependence, or any troubling issue – presents an ideal opportunity for healing. Ginger chose the sunflower as a logo because the sunflower looks up to heaven.

Through Ginger’s story, students and parents begin to recognize the telltale signs of alcohol and other drug use. She also describes the veils behind which those signs hide: anger, denial, fear, pain and deception.

“Saving Lives By Empowering Youth To Be Drug Free And Encouraging Parents To Communicate Effectively With Their Children About The Dangers Of Drugs.”

The Courage To Speak ® Presentation
To date the organization has made over one-thousand presentations to a variety of audiences: students in middle schools, high schools and colleges; parent groups; civic organizations; churches; corporations; federal agencies and national conferences.

Courage To Speak Courageous Parenting 101® This curriculum is taught by over 100 facilitators in 5 states of which 13 facilitators are bilingual. The curriculum is in both Spanish and English. These programs have been evaluated and recommended by the Yale University School of Medicine.

Educational Outreach Program
Parents and family members who have lost a child to drug abuse are recruited and trained to use The Courage to Speak Video Presentation and Facilitator’s Guide to inspire open and honest discussions between adults and children in their schools and communities.

Community Information Campaign
Disseminates information to children, parents, educators and others through print, radio and television. The Foundation is an important media resource for information related to drug prevention at the local, regional and national level.

The Courage To Speak® Empowering Youth To Be Drug-free Family Night
A unique and very special feature of The Courage To Speak Curriculum Programs. Children, parents, teachers and community leaders come together to see what the children have learned in the substance abuse education programs for youth and talk together honestly- perhaps for the first time-about the dangers of alcohol and other drugs.

The Courage To Speak Video
This award winning video covers the impact of addiction on the family; the code of silence and how it presents a dangerous problem when someone is in trouble; what to do when you know there is a problem; why parents need to learn about alcohol and drug use among youth; and how parents, youth, and communities can save lives.

Watch a sample of the Courage to Speak video.

The Courage to Speak Support Groups
Support groups meet monthly and are available for parents and family members who have lost a child to drug abuse.

Referral Help-Line
Provides families seeking aid for addicted children with a broad base of information about treatment facilities, counseling, support and other relevant data.

Basketball Classic Event
A continually evolving basketball tournament that reaches thousands of people with the Courage to Speak’s message and helps raise funds for its programs. It has received extensive local and national media coverage including NBC’s “NBA Inside Stuff.”

The Courage To Speak® Board of Directors 2019